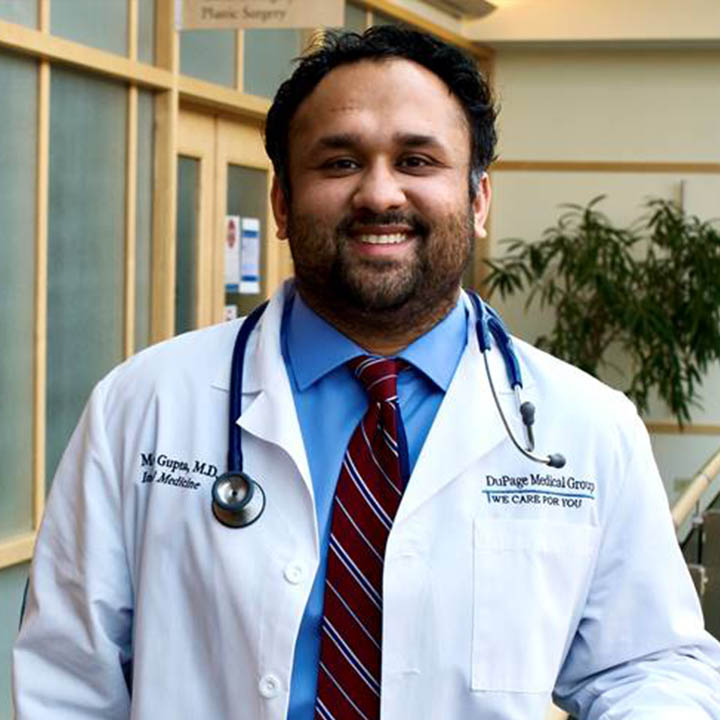 Since graduating from Lawrence in 2011, Dr. Mohit Gupta has never ceased his involvement with his alma mater.

As a member of his Class Leadership Team and an admissions volunteer, Gupta has interviewed prospective students and helped with admitted student receptions and college fairs. As a donor, Gupta has supported Lawrence with eight years of cumulative giving to the Lawrence Fund, specifically for student scholarships. Earlier this year, he increased his annual donation and became a member of the Founder’s Club.

Gupta knows that his time in college was meaningful in setting him up for the future, and he would not be as successful as he is today without his Lawrence education. Now, he donates to ensure that current students are able to experience the same education that he did.

Although he is now working as an internal medicine and primary care doctor in the suburbs of Chicago, when he first got to Lawrence 13 years ago, he wasn’t sure whether his biochemistry major would lead him into practicing medicine or research. Gupta was only able to solidify his post-college plans with the help of trusted professors and advisors—a relationship he does not think he would have had at many other universities.

As well as the low student-to-faculty ratio, Gupta acknowledges the culture of Lawrence as instrumental in preparing him for future success. Although the active dedication to activities and organizations he saw in his classmates was sometimes “intimidating,” Gupta was inspired to take on a greater role in a variety of student organizations, including Habitat for Humanity, Phi Kappa Tau and Lawrence International. Gupta trusts that while applying to medical school, this level of involvement—which he considers to be very typical of a Lawrence student—set him apart from the majority of applicants.

Further, Lawrence’s dedication to interdisciplinary education ensured that Gupta would have the knowledge to become a well-rounded doctor. Combining the knowledge of the human body gained from his natural science courses and the understanding of the cultural, economic and social factors that go into medicine gained from his courses in anthropology, Gupta is able to provide multifaceted treatment to his patients.

“There are a lot of things that go into medicine,” Gupta said. “It’s not just, ‘OK, there's a disease, and there's the biochemistry and the pathology behind that disease, and this is how you treat it.’ You are treating human beings, and there are other factors that go into that … Those factors will influence how people view their own health, and how people address their own health.”

Gupta has seen what Lawrence has to offer through his own experience—and he believes that no student should be blocked from receiving the same benefits and preparedness due to financial restrictions.

Gupta knows that these factors are important—and that is why he donates.